In-plant aluminum dross recovery has been a successful reality for more than five years, with most of the emphasis on small volumes of dross.  Opportunities for larger volumes are now opening, with units offered in capacities of up to 1,500 lbs. of hot dross.

For example, a 300-lb Remote Station Dross Boss™ unit has been in operation for an Australian foundry since January 2013.  The plant is processing hot dross with the equipment for in-plant recovery of a variety of A356 alloy dross forms. Through 10 months of daily operation the daily recovery of clean, on-specification A356 alloy has averaged 400 kg.

With those results, the Australian foundry reported a return of their capital investment was achieved in less than five months.

The Dross Boss™ recovery process starts with the transfer of a mixture of hot dross and recoverable aluminum from a melting furnace to a special “reaction vessel” (RV.) Then, that load of material is transported by lift truck to the mixing station, where it is manually loaded on an elevator before starting the recovery operation.

Depending upon the dross condition and the presence of flux from prior treatments, a small additional quantity of exothermic flux may be added to support the gravity separation of aluminum metallics from the hot dross.

A view of the reaction vessel cart being loaded into the mixing station for the recovery operation.

The recovery operation is controlled by a PLC program that raises the RV to engage the mixing blade in the dross mass, starts the rotation of the gear motor and mixing blade, and runs an optimized program to achieve a gravity separation of the entrapped alloy and oxides.  The recovered metal drops to the bottom of the RV while the oxides float on top. The actual process time in the mixing station is less than five minutes. Then, the end product is drained from the reaction vessel through a bottom port.

In the example of the Australian installation, the total weight of dross processed per day is 1,000 kg, and is collected in two Reaction Vessel carts with different load sizes averaging 110 and 130 kg. These are used to collect and process all dross forms produced in that foundry.  The recoveries range from a low of 25% on the thermitting drosses to a high above 60% on the richer material.

After 10 months of production there the reaction vessels have performed well, with only two minor incidents of weld seam separations that required repairs.  The mixing shaft assembly has also been trouble free. The superintendent at that foundry confirmed, “it’s a great product.” 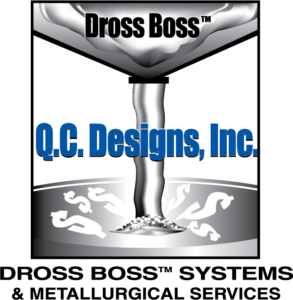